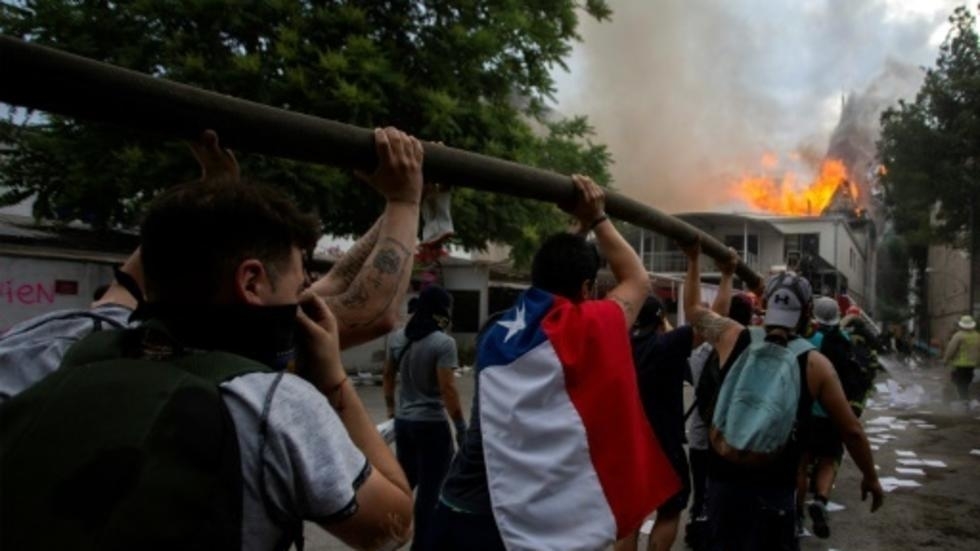 They send their children to the same schools, vacation in the same lakeside resorts, and marry into each others’ families.

Chile’s long-untouchable elite is now bearing the brunt of popular anger spilling onto the country’s streets, and analysts say the signals have been there for years.

Resource-rich Chile has long been seen as a stable democracy with South America’s highest per-capita income, but economic and political power has rested in the hands of the relative few.

Analysts say that below the surface the signs of social unrest have simmered for years, with the working class failing to benefit from the trickle-down of three decades of growth after the country transitioned from dictatorship to democracy in 1990s.

«There is a tremendously strong disconnect between them and the rest of the country,» said Matamala.

Their isolation from the needs of ordinary people has been one of the chief factors in the weeks of rage consuming the country, in which looting and rioting have wrought widespread destruction and left 20 people dead and thousands injured.

Influential families names like Larrain, Walker, Edwards, Zaldivar or Chadwich have long been mainstays in the Andean country’s Congress and boardrooms.

The president’s wealth sets the tone. Pinera amassed a $2.7 billion fortune before taking office, according to Forbes. He calls that an underestimation.

Against that backdrop, protesters are angry about low salaries and pensions, poor public health care and an unequal education system, as well as a yawning gap between rich and poor.

Added to that is the elite’s «very disdainful attitude towards society,» says Claudio Fuentes, a researcher at Santiago’s Diego Portales University.

When protests were finally sparked by a public transport peak-time fare hike, one of Pinera’s ministers only compounded the anger by suggesting workers should get up earlier if they wanted to avoid paying the rush hour fares.

«The feeling is that they have privileges, and many resources and keep them for themselves,» perpetuating a situation in which jobs and influence are shared out among the families, associates and friends of the elite, says Fuentes.

Two-thirds of the members of Pinera’s cabinet — until he announced a reshuffle to try to appease protesters — were educated at six exclusive schools in Chile, according to Matamala, a proportion only marginally altered after the reshuffle.

So much of the anger spilling daily onto the streets since October 18 has been stoked by a popular feeling that the business and political elite have emerged unscathed from a wave of high profile corruption cases.

The Social Thermometer, a public confidence index maintained by the University of Chile, showed public institutions scoring less than 3 out of 10, with business leaders faring only slightly better.

At the other end of the spectrum, institutions like the Fire Service — a volunteer service in Chile — scored highest for public trust.

«The widespread feeling is that the elite have many privileges, especially access to justice,» said Sofia Donoso, a sociologist at the University of Chile.

In that regard, «the feeling of impunity linked to the corruption scandals of recent years is foremost in people’s minds,» she said.

Analysts have pointed to an accumulation of anger in recent years over a wave of corruption cases involving money laundering, tax fraud and illegal political party financing, where those convicted avoided prison sentences by paying fines or being sentenced to ethics courses.

Paper products company CMPC agreed to pay a large fine after being found to have colluded with other companies to increase the price of toilet paper.

«The rules governing the influence of money in politics are rather lax and are not very well respected,» said Matamala.