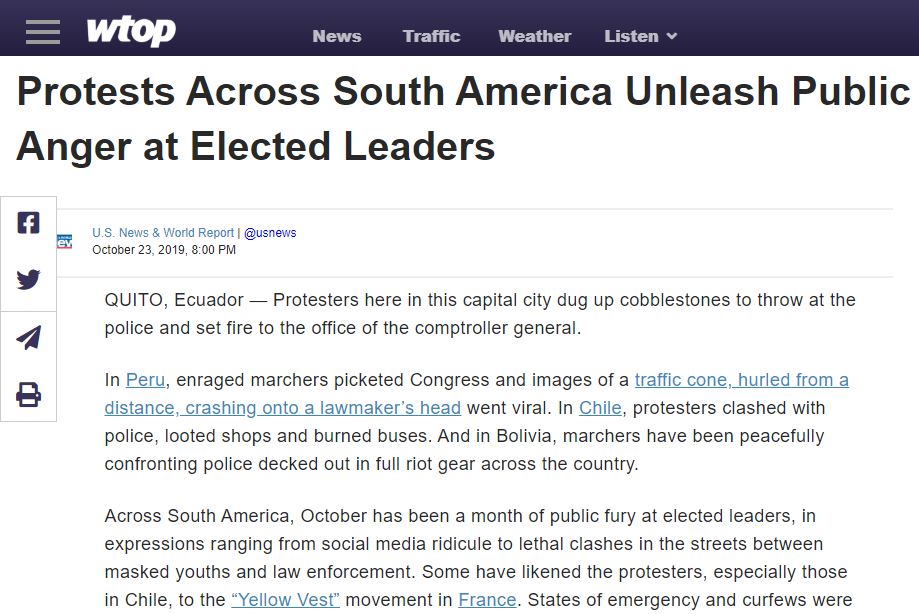 Protesters here in this capital city dug up cobblestones to throw at the police and set fire to the office of the comptroller general.

In Peru, enraged marchers picketed Congress and images of a traffic cone, hurled from a distance, crashing onto a lawmaker’s head went viral. In Chile, protesters clashed with police, looted shops and burned buses. And in Bolivia, marchers have been peacefully confronting police decked out in full riot gear across the country.

Across South America, October has been a month of public fury at elected leaders, in expressions ranging from social media ridicule to lethal clashes in the streets between masked youths and law enforcement. Some have likened the protesters, especially those in Chile, to the “Yellow Vest” movement in France. States of emergency and curfews were declared in Ecuador earlier in the month, and this week in Chile and Bolivia.

Although the precise triggers and broader political dynamics are distinct in each country, underlying issues appear to resonate beyond the region and chime with the wave of populist politics sweeping the world: economic inequality, corruption and elected leaders out of touch with the citizenry.

“What they have in common is this complete lack of trust in political parties and leaders,” says Michael Shifter, president of the Inter-American Dialogue, a Washington think tank. “There is just this enormous discontent that leaders seem so disconnected from the people they represent.”

The tensions have also been exacerbated by slowing economies following the fall in commodity prices, on which many of the region’s economies are highly dependent.

Here in this small Andean nation, the spark was the removal of gas and diesel subsidies, roughly doubling the price of transport for people and goods alike. It was part of a larger packet of economic reforms aimed at curbing the yawning gap between Ecuador’s public spending and tax revenues.

In Peru, the protesters were actually backing the president against the opposition-controlled Congress, which he dissolved over its blocking of anti-graft reforms. In Chile, the public trigger was an apparently modest fare hike on the Santiago metro, from 800 to 830 pesos (roughly $1.13 to $1.17).

In Bolivia, demonstrators are furious at what they allege is electoral fraud to allow President Evo Morales to avoid a run-off vote and illegitimately start a fourth term in office. Without warning, the electoral authorities suspended updates on the vote count for 24 hours, a period that allowed Morales to inexplicably extend his lead over challenger Carlos Mesa to just over the 10% threshold needed to avoid the runoff.

The common thread between Ecuador and Chile is government austerity involving cuts to spending aimed at helping the poor.

In Ecuador, the slashing of fuel subsidies was intended to be part of a larger program of reforms agreed with the International Monetary Fund to right the listing ship of the commodity-dependent economy. Yet the IMF had warned President Lenin Moreno, a center-leftist, to implement the cuts in a ” careful and gradual” manner to avoid a backlash from the poor while CONAIE, the umbrella organization for Ecuador’s large indigenous population, had threatened to launch protests.

Moreno eventually acquiesced to the protesters, reversing the fuel hike and starting talks with CONAIE. However, those negotiations broke down this week over prosecutors’ investigation of protest leaders for alleged “subversion.”

Meanwhile, Chile may be one of Latin America’s most prosperous and stable societies, but it remains deeply divided by the ultra-conservative political and economic legacy of the dictatorship of the late Augusto Pinochet. According to Sofia Donoso, a University of Chile sociologist, half of Chileans earn less than 400,000 pesos (roughly $550) per month and would be significantly impacted by the metro fare rise.

“It was the drop that made the glass overflow,” says Donoso of the metro fare hike. She also accused the government of inflaming the protests with its “lack of empathy” and “criminalization” of the protests. President Sebastian Piñera, a center-right self-made billionaire, had initially declared “war” on the protesters, while also allowing himself to be spotted dining out in a restaurant in Santiago’s fanciest neighborhood.

Piñera has since also reversed his economic reforms, canceling the public transportation price increases, raising the minimum wage and slapping a new 40% income tax on those earning more than 8 million pesos (roughly $11,000) a month. “We have listened with great care and humility,” to the demands of the protestors,” the president said in a televised TV address, adding that they had “genuine and authentic” reasons to be in the streets. Yet the demonstrations continue.

That backdrop of government austerity and economic inequality also appears to have doomed the Oct. 27 re-election bid of Argentina’s President Mauricio Macri. The center-right leader has also been trying to rein in his country’s unsustainable deficit and enormous bureaucracy, which had ballooned under his left-wing populist predecessor Cristina Fernández the Kirchner. The cuts — and Argentina’s plunging currency — have drastically hurt the poorest.

Ironically, in Bolivia, Morales has overseen a significant reduction in poverty and inequality yet is now the target of mass protests over his inability to leave power. That he was even running for his third consecutive re-election was highly controversial after he lost a constitutional referendum on the issue in 2016.

The Organization of American States is now questioning the Bolivian elections and demanding the government make public the vote count process.

“People are indignant,” says Waldo Albarracín, rector of La Paz’s San Andrés Superior University, whose bloodied face was splashed across TV screens after he was gassed and hit on the head by a projectile as police sought to close down demonstrations. “It will take mass protests at the very least. We demand a runoff election with new impartial electoral authorities.”