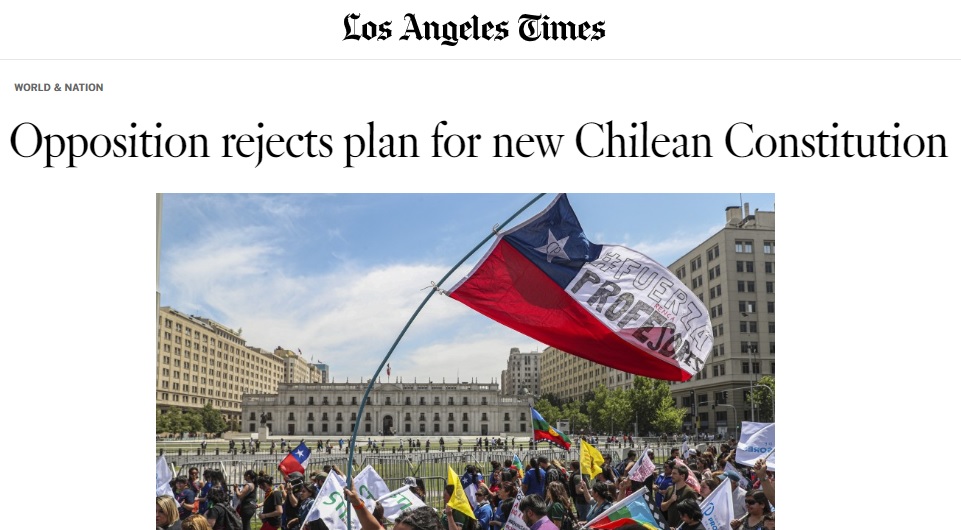 A plan by President Sebastian Piñera to draft a new constitution for Chile was criticized Monday by the opposition and even his own political ranks.

The proposal unveiled Sunday by Interior Minister Gonzalo Blumel is one of a series of measures aimed at quelling weeks of protests by Chileans over economic inequality and other grievances.

It calls for a new charter to be drafted by a “constituent congress” and then put to a plebiscite, Blumel said.

But the opposition said the proposed process was inadequate, partly because it would rely on current legislators who are viewed with suspicion by protesters. They also said the plebiscite should occur at the beginning of the process, so people’s views could be considered.

“The citizenry is demanding something different,” opposition Sen. Felipe Harboe said. He said people want a “constituent assembly” or some other form of direct participation in writing any constitution.

Karla Rubilar, the government spokeswoman, on Monday rejected the call for a constituent assembly, which would involve the election of a group of citizens to draft the new constitution.

Students in Chile began protesting nearly a month ago over a subway fare hike. But demonstrations quickly blew up into a huge protest movement demanding improvements in basic services and benefits, including pensions, healthcare and education. Chile is one of Latin America’s richest, but most socially unequal countries.

Although most protests have been peaceful, at least 20 people have died in clashes between protesters and police.

A key demand of demonstrators has been to throw out the constitution that was drafted in 1980 during the dictatorship of Gen. Augusto Pinochet. The constitution is the legal basis for the market-driven system that protesters say favors Chile’s affluent minority.

The public healthcare system is bogged down with months-long waiting times, and those seeking higher education are often saddled with crushing student debt.

Piñera has responded with a series of proposals over the weeks, including an increase in the basic monthly pension of $146, a cut to the salaries of legislators, and a tax hike for people who earn more than $11,000 a month.

But anger in the streets still boils. Protests continued Monday in the capital, Santiago, ahead of a national strike called for Tuesday.

“We’ve seen that, in general, the government arrives late and with a weak response to societal demands,” said Claudia Heiss, a professor at the Institute of Public Affairs at the University of Chile, who considers this an opportunity for the government to react in a more convincing way.

Marcelo Mella, an analyst at the University of Santiago, said it is doubtful sectors of the opposition will accept the government’s plan as a legitimate procedure.

Given the low levels of approval for Congress and the government, “legitimacy [of the process] is a very scarce commodity within the political class,” Mella said.