[OPINIÓN] If Piñera wants to wage war in Chile he should fight the real enemy: inequality 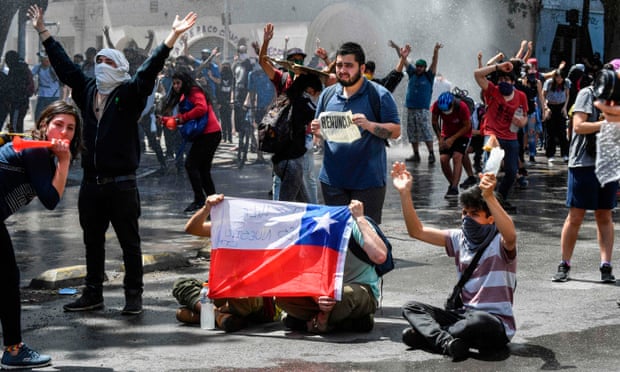 The president declared ‘Chile is at war’ but the crisis is, at heart, a message to the Chilean elite: profound changes are needed to rebuild the social contract.

As with the yellow vest movement in France, it was impossible to foresee that an increase in the price of the Santiago metro would trigger demonstrations throughout Chile. When you think about it, however, it is unsurprising. Inequality in Chile is scandalous and most middle-class Chileans live in precarity. Now Chile is roiled by mass protests and looting; the government has declared a state of emergency and imposed curfews in many cities across the country.

The scale of the looting shows that the country has a structural problem with a clear name: inequality. The per capita income of the bottom quintile of Chileans is less than $140 a month. Half the population earns about $550. Tax evasion has cost the treasury approximately $1.5bn. Two-thirds of Chileans believe that it is unfair that those who can pay more have access to better health and education. They’re right.

The images of discontent and anger around the country are shocking to watch. Yet the current Chilean administration and much of the political class simply do not seem to understand the magnitude of the problem or what is at stake. On Friday night, as the situation spiraled out of control, the president, Sebastián Piñera, dined in Vitacura, the richest neighborhood in Santiago. A few days earlier, the minister of economy suggested that since the price of the Santiago metro is cheaper in the morning, people should get up early to save money. Attitudes like these only reinforce the existing malaise.

How have Chilean authorities responded so far? On the one hand, they have kept an inexplicable silence and their actions have been late and incompetent. On the other hand, the government has begun advancing an increasingly authoritarian message implying that the conflict must be solved with repression.

“Chile is at war,” Piñera declared on Sunday night. He argued that the country is facing a powerful and violent foe and that the government should respond in kind. Those who lived through the Pinochet dictatorship heard those words with dismay. While it is true that the looting is serious and security is needed, it is alarming that the government does not have the slightest interest in understanding the social discontent in Chilean society.

The Prussian military theorist Carl von Clausewitz famously argued that “war is the continuation of politics by other means”. When the president of Chile asserts that the country is at war and implies that the armed forces must solve the problem, he has effectively abdicated his job: to govern. (Luckily, Gen Javier Iturriaga, who is in charge of the emergency situation, later declared that he is not at war with anyone.) Piñera and his advisers do not seem to understand that the problem facing the country is not a military one but a political one. This crisis is, at heart, an urgent message to the Chilean elite: profound changes are needed to rebuild the social contract.

The longer it takes the government to understand this, the harder it will be to get out of this catastrophe. Real political reforms will take time, but there are symbolic measures that the government could take as a first step, like firing the cabinet ministers who have shown themselves to be most out of touch with their own people.

If the Chilean government chooses a repressive path, it will not only generate more violence, but also give greater voice to radical and autocratic rightwing forces. Democracy itself is at stake. If Piñera wants to wage war, he should wage war on the real enemy: inequality. This war can be won only through politics and not by other means.